August 26, 2004: I fell in love with the purple markings in box elder when I saw it used in a dulcimer. However, after researching, I've decided not to use it in my kantele. It's light-weight, soft and not very strong and it's used for low quality furniture and paper pulp. Better choices would be birch, walnut or maple...but I would love to find something with an interesting grain.

September 8, 2004: After talking to kantelemaker Michael King, I decided to go with the box elder after all. Michael says box elder is only a little softer than the maple (English Sycamore) that he has often used. According to him, its more like the density of English Cherrywood. Its only very weak in comparison to American Maple. He said I could add 1mm to the depth to give it extra strength and the only downside is that the thicker soundboard would take a little longer to play-in.

September 18, 2004: I spent the last ten days looking for box elder. I checked every online source that I could find and called every hardwood/exotic wood supplier in my part of the State. Apparently, box elder isn't easy to find and suppliers don't have a steady source for it. I'm out of luck. The good news is that I found another wood that I love the looks of - and after further research, I think it'll make a beautiful sounding instrument, as well. It's called Port Orford White Cedar and I found it online at Oregon Wild Wood. You can see a picture of it below.

Port Orford White Cedar is rot resistant, bug resistant, and is prized for instrument making. It's a very rare wood that only grows along a 100 mile stretch of the coast and 30 miles inland. It's light, yet strong with 2/3 the breaking strength of white oak.

My email to Oregon Wild Wood was followed by a phone call from Vince Strauss who told me that his entire supply of instrument quality Port Orford White Cedar had just been purchased by a guitar maker. However, he had a few pieces of lesser quality wood remaining. I asked him how it differed from the instrument quality wood and he said it had cosmetic "blemishes". Best quality Port Orford White Cedar is known for its even, tight grain (up to 40 rings per inch), and lack of blemishes. The wood he had remaining might have even, tight rings, then a couple of rings might look darker before resuming the "normal" coloring. This kind of cosmetic "blemish" wouldn't disturb me at all, I said. In actuality, I like the little markings on my kanteles, and use them as visual cues as to where to place my fingers! I placed an order for two pieces of wood...just in case I made a mistake and had to start over. (Cost of the wood: $78.00) Mr. Strauss said "my" wood comes from a tree that is 350-400 years old. I can hardly wait to see it.

Michael wrote back: "Hello Lani, I had a Lovely Cherry plank a year ago with the same dilemma, I say go for it! On the positive side you have less wood to hollow out!" What a relief to hear! Of course, now I have to find some tools because I don't own any! 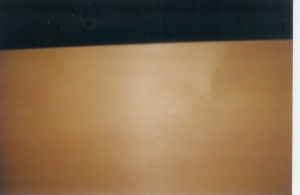