This song can be found in my latest book: I Sing To You: 100 Finnish Folk Songs and Tunes with Sing-able English Lyrics. The version in this book is a simple arrangement that includes the melody line, lyrics and chords.

My latest video is a collaboration with Finnish Indie game developer - and musician - Sami Maaranen. His RPG game, UnReal World is strongly inspired by and based on Iron-age Finland and the "Kalevala culture". I play the kantele and Sami plays drums in this song, which is the opening song of the game. If you're interested, you can download a free copy of the game at: www.unrealworld.fi.

This song, Kalliolle Kukkulalle (On the Clifftop) - which is beautifully animated by Saana Herranen - can be found in my new book: I Sing To You: 100 Finnish Folk Songs and Tunes with Sing-able English Lyrics.

Aino's reaction to being told she is to marry old Väinämöinen, after her brother
Joukahainen loses a singing contest to him, is told in Rune 4 of the Kalevala.

I decided to experiment by including a rhythm track with this song, which tells the story of Väinämöinen's Birth.

Michael King, a UK luthier, made the beautiful pentatonic kantele I'm playing in this song, which I wrote to express my love for my home in the western mountains of Maine.

I've been working on a series of songs inspired by the Kalevala. This song, which I call Sahri Maid comes from Rune 11 and it tells the story of Kyllikki's abduction by Lemminkäinen.

I developed my own method of playing kantele because it was hard for me to pluck the strings in the "traditional" way. Some people who've seen me play like my style of plucking, and have adopted -- and adapted -- it to suit themselves. 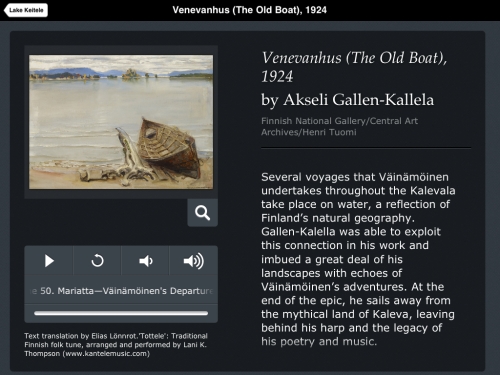 I was honored in the fall of 2012, when the National Galleries of Scotland asked me if they could use my arrangement and recording of the traditional Finnish folk tune "Tottele" as the background to a reading of an extract from The Kalevala, which will be available on a touch screen for people to listen to in relation to a painting by Akseli Gallen-Kallela. A picture of the touch screen presentation is shown above. A link to the audio track can be found here. If you'd like to listen to the music itself, you can hear it here.